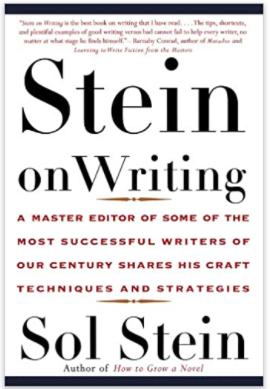 Sol Stein penned his first story on telegram blanks, stolen from Western Union. “My father took them from Grand Central Station because we couldn’t afford paper in the depths of the Depression,” Stein said. His first poem was then published in a school paper when he was seven. “I wrote my first book when I was thirteen and it was published when I was fifteen,” he said. “When I went to see the publisher, he asked why my father didn’t come himself.”

“If you bury yourself in a Sol Stein book while walking,” said The New York Times, “you’ll walk into a wall.”

Stein’s talents extend even further than his own writing, though. He also founded the published housing, Stein & Day, ranked by Writer’s Yearbook as the third best book publisher in 1985. His company published the works of the Shah of Iran, British Prime Minister Edward Heath, Steve Allen, F. Lee Bailey, and Desmond Morris. Another inspiring author published by Stein & Day is Christy Brown, a writer who only had the use of his little toe on his left foot. The award-winning movie, My Left Foot, recounts Brown’s life and his amazing accomplishments.

“If Brown could write, I can’t accept excuses like ‘I don’t have enough time’ or ‘I can’t make enough money writing,’” Stein said. “Those who have sex find time for it. Those who want to write badly enough find time for that, too. If anybody or anything can stop you from writing, you may not be a writer.”

You don’t have to travel the writing trail alone, though. Stein’s book, Stein on Writing, will guide you through the journey. His exercises coax out quality work, earning praise from writers and publishers everywhere. Five-time Pulitzer winner Elia Kazan, for example, had this to say: “My publisher Sol Stein was my producer, and my editor Sol Stein was my director. Sol saw what I didn’t think possible.”

Stein divides his writing guide into seven sections. The first, called “The Essentials,” entices you to plunge right in to construct an inviting first paragraph. Stein gives concrete examples of intriguing hooks and instructive examples of the yawners. He challenges you to “excite the reader’s curiosity, preferably about a character or a relationship.” Review your opening. “Does it convey an interesting personality or an action that we want to know more about? Can you make your first sentence more intriguing by introducing something unusual, something shocking perhaps, or something that will surprise the reader?”

Section Two starts with a chapter titled “Competing with God: Making Fascinating People.” In it, Stein gently but firmly turns you away from the cliched characterizing that lists every physical attribute on a person’s body. Instead, by choosing just the right physical and psychological characteristics, Stein helps you to create lasting characters. His explanation of character markers especially sparkles. “The first job of a novelist is to create memorable characters who are more interesting than many one meets in life,” Stein said. “Build a story around these characters, so readers will want to spend time with them.”

Stein on Writing then moves on to the clashing of swords: the plot. By teasing the conflict out of the rounded characters you’ve already created, Stein helps you to avoid unlikely plots. “Can you make it [the plot] surprising by setting up an action and then showing the opposite of what your reader is likely to expect?”

As Stein points out, “Beginning fiction writers sometimes hobble themselves with made up sounding stories. The way to avoid superficial fiction is the ‘secret photograph’ technique. Imagine a photo you wouldn’t want anyone else to see. The usual response is of a moment or event that means a great deal to you. Because of its latent emotional power, the moment contains a reservoir from which you can pull up valuable material that will impact the emotions of the reader.”

In the book, he suggests subtle ways to create suspense and tension, the marrow of good plotting. He offers a method for causing immediate conflicts, one used by the Playwrights Group of the Actors Studio. Stein jointly created this prestigious group with Tennessee Williams. He also insists on fresh dialogue that “begins or heightens an existing conflict . . . stimulates the reader’s curiosity . . . creates tension . . . or builds to a climax.”

Section Three of the book offers suggestions for both fiction and nonfiction writers. “The first job of a nonfiction writer is to convey information in a way that entertains as well as instructs,” Stein said. “That is why I emphasize the use of fictional techniques to enhance nonfiction.”

The chapter titles in this section sum up the contents well: “Amphetamines for Speeding Up Pace” and “Liposuctioning Flab” are just two of them. Section Four focuses strictly on nonfiction with a thought-provoking chapter called “Guts: The Decisive Ingredient.” The next section, “Literary Values in Fiction and Nonfiction,” emphasizes what Stein called particularity, a “detail that individualizes.” Instead of calling a smile fake, for example, Stein calls the smile an “implant.” Finally, the last two sections of the book provide revision techniques and places to head for additional help.

Stein on Writing is only the latest success in a long list of his professional accomplishments. The author of nine novels and two plays, Stein was also the originator and general editor of an early line of trade paperbacks. He co-founded the Mid-Century Book Society, a successful book club for the educated reader. He served as a consultant for various publishers and lectured on writing at several colleges, earning the Distinguished Instructor Award in 1992. He also created a sales promotion campaign that caused the Coca-Cola Botting Company of New York to run out of bottles for the first time in history.

He has appeared on the Today Show, the Tonight Show, the Larry King Show, the David Frost Program, and major interview shows in New York, Paris, London, Los Angeles, Atlanta, Chicago, Miami, Houston, Dallas/Fort Worth, Phoenix, Hartford, Boston, Cleveland, and Cincinnati. Stein is listed in Who’s Who in America, Who’s Who in the World, and Who’s Who in Entertainment. He also created an award-winning software program called WritePro that will guide you through the often-treacherous writing process. According to Stein,  you can’t get writer’s block when using WritePro.

Steve Bass, president of the Pasadena IBM Users Group said the following in the Pasadena Star-News: “I don’t think I’m exaggerating if I tell you that WritePro is perfect for everyone who has to —or wants to—write. The program is easy to install. It’s automatic and friendly, including step-by-step lessons, each taking you further along the road to making dialogue come alive, creating expressive characters, devising and fleshing out plots, building beginnings that hook the reader and using the computer to do my absolute favorite, ‘flab editing.’ The program’s style is supportive and, with not much brain strain, offers results you can see almost immediately.”

Stein said he believes that instruction by computer is wonderful. “Those programs are designed to pass on the techniques developed by thousands of writers, so newcomers don’t have to lose years of life reinventing the wheel. I cherish letters from writers who attribute getting their first work published as a result of what they learned.” When he edited James Baldwin, Jack Higgins, Elia Kazan, and others, it had to be face to face. “Now,” he said, “through the advent of computers, I can settle in to guide a writer as he writes anywhere in the world.”

Stein believes it is the responsibility of each writer to the best job possible every time. “Top of the head writing and hackwork tends to destroy talent, the most valuable possession a writer has,” he said. “A writer is not responsible for the fate of Bosnia or the world, but writers seem to have had more lasting influence on what each generation passes on to the next than any other profession. That makes each writer, on a small scale, responsible for the culture inherited by our children.”

He is also convinced that books will continue to be a staple in our culture. “We can read them at our own pace any time and anywhere, and there are so many thousands to choose from.”

Stein is still adding to that number. He is writing his tenth novel, White Tribes, using the same characters as in The Magician, his novel that sold more than one million copies.

“I’m also writing a memoir called Passing for Normal,” he said. “And I just finished writing a computer program called WritePro for Business. Many businessmen and women are terrified of writing. Their letters, memos, and reports sound like forms instead of human communication. It’s exciting to see how the business beta testers are responding enthusiastically to a vehicle that enables them to write effective letters.”

Stein has seen many changes in the writing and publishing industries. “Book publishing has changed dramatically in my lifetime from a vocation for people who loved books to a business like the movies or any other business,” he said. “Yet I still meet young editors who thrive on finding and guiding a new work.”

His own daughter Elizabeth is just such an editor at Simon and Schuster. “I’m immensely proud of Elizabeth. She has worked on several fine books recently that have made page one of The New York Times Book Review and national bestseller lists,” said Stein. “Discovering or enhancing the work of talent is still a remarkable vocation.”