A Look at Lodowick G. Miller

Over the past few years, I’ve done a deep dive into the life of Wells Waite Miller, a forgotten Civil War hero. Although I’ve found more information about him than I originally anticipated, I’m far from done—and, in this post, I’m going to share what I’ve learned about his brother, Lodowick. He also fought for the U.S. Army during the Civil War but came to a more tragic end.

The parents of Lodowick and Wells—Amos and Emily (Graves) Miller—had five children in total, but three of them died in a very short period of time at far too young of an age. Because other young children and older adults died in their small community in the same time period, I suspect an epidemic, perhaps cholera, smallpox, or typhoid.

After little Amos died in 1841, this briefly left one living child: Lodowick G. Miller born in 1830. I’m guessing that “G” stood for “Graves” because he was likely named after his mother’s brother, Lodowick, who died in 1829. You can find more of that story at Grandparents, Parents, and Siblings. Lodowick wasn’t an only child for long, though. Wells Waite was born on February 20, 1842, about one year after Delia, Helen, and Amos died. 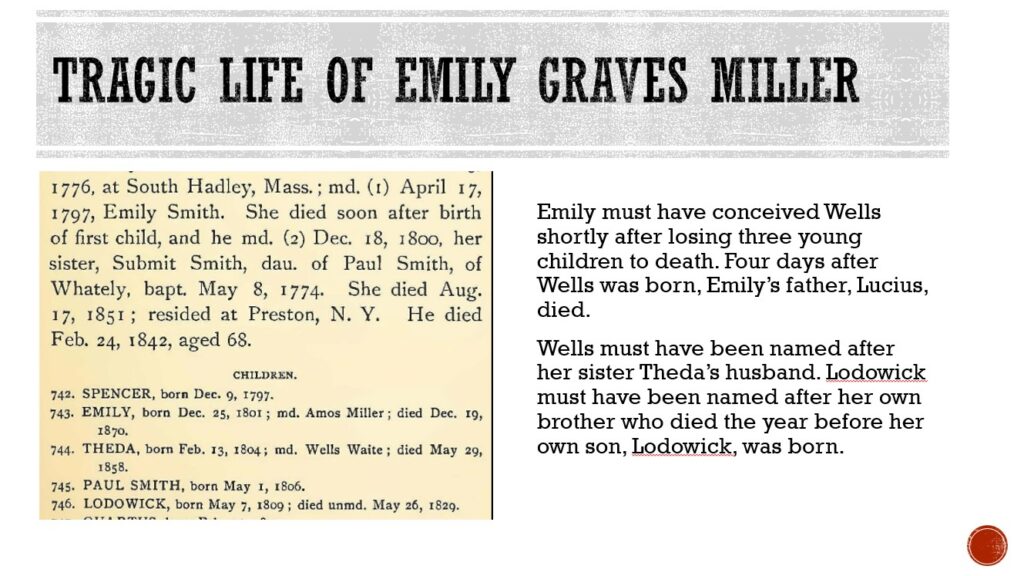 The first official presence of Lodowick that I’ve found is in the 1840 census when the family lived in Enfield, New York.

No names were listed, but this tells us that the household consisted of eight people, which would be the six Millers (Amos, Emily, Lodowick, Delia, Helen, and Amos) plus two unknown people (although the census lists them as free and white). Lodowick apparently was still nine years old, assuming that the hash marks appear in the correct categories. We don’t know his month and day of birth; because official census day in 1840 was June 1, it may well have been after that.

Job categories were pretty limited then, according to governmental archives: 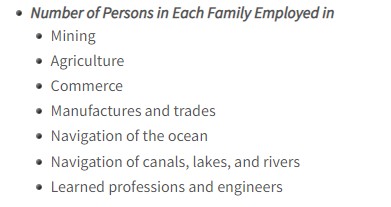 Only only person was employed in the Miller household, which makes sense since Lodowick was only nine years old. Amos, who worked as a wagon maker, was listed as working in manufactures and trades.

In the 1850 census, twenty-year-old Lodowick was listed as a farmer. Enfield was a rural town, so that also makes perfect sense.

By the time the 1860 census rolled around, the Miller family had moved to Castalia, Ohio, another farming community. This time, though, the census listed Lodowick’s employment as “erratic.” The Millers owned a farm in Castalia, so it’s odd that he wasn’t listed as an agriculture worker. I’d like to believe that “erratic” meant something similar to doing odd jobs, but that still raises the question of why he wasn’t working at the family farm.

Shortly after this census, the country erupted into what’s now called the Civil War. Wells is listed as the earliest man from his small community to enlist, doing so with the 8th OVI in response to President Abraham Lincoln’s call for aid.

While Wells was away, training for the military, Lodowick married Mrs. Sarah Fleming. The marriage contract was “solemnized” on March 6, 1861 (pre-war) and the wedding date was May 18, 1861 (during the war). 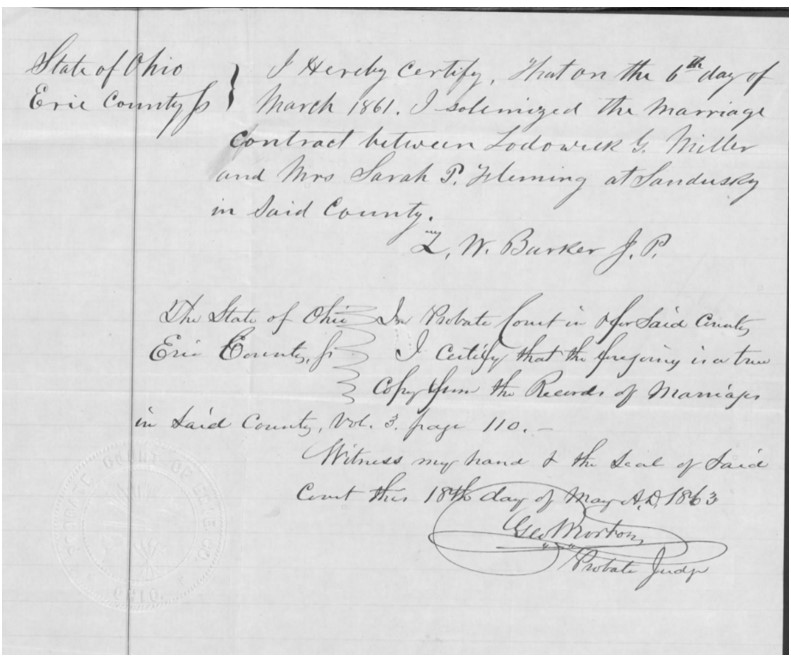 Here is their marriage license:

Lodowick enlisted as a private in the 72nd OVI, Company A, which organized between October and December 1861, but he didn’t serve for long. The 72th OVI was in the area of Shiloh, Tennessee, about to engage in what some have called the unit’s best fighting.

Illness struck Lodowick, down, however, just like it almost certainly did to his three siblings more than twenty years before. 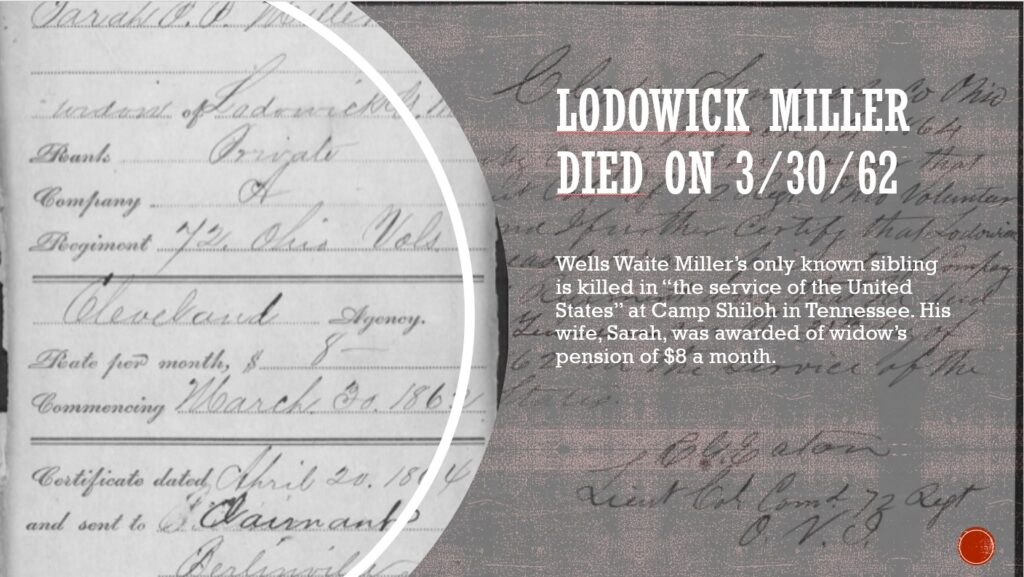 Slightly more than one year after Lodowick’s and Sarah’s marriage was “solemnized,” she was a widow. Here is her pension letter. 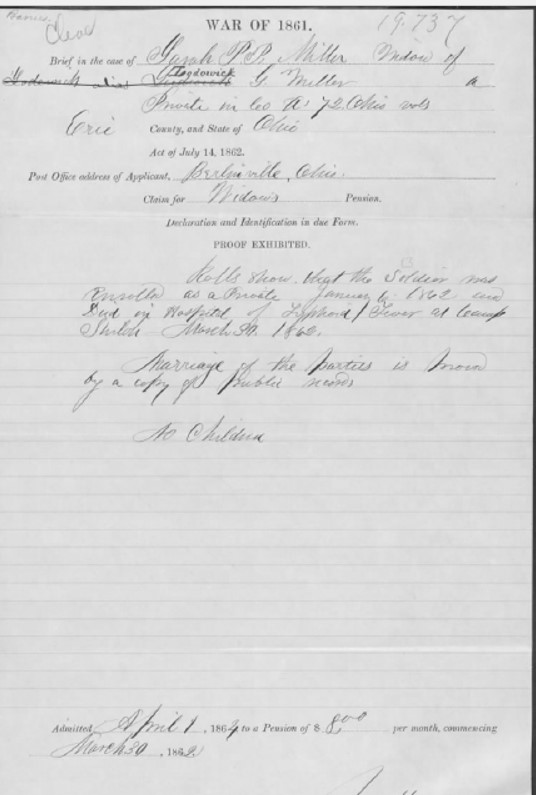 From Typhoid Endemic to Today’s Pandemic

Fast forward to March 9, 2020. Worry hung heavily in the air. What was COVID-19, and how dangerous would it get? I was scheduled to give a presentation about Wells Waite Miller at Lorain County Community College for the Quincy Gillmore Civil War Roundtable. I gave it to a friendly crowd, and this was the last thing I did outside of my home before sheltering in place because of the pandemic. Four days later, I got an email from a man named Bill Stark. He introduced himself; said he was at my presentation; and added that he was a Graves Registration Officer for James A. Garfield Camp #142, Sons of Union Veterans of the Civil War.

Bill had a question—not about Wells, though. About Lodowick. Someone named “S.G. Miller” of the 72nd OVI was buried at the Shiloh National Cemetery. In other records, the name was listed as Ludwig Miller. In another, it’s an unknown burial.

Actually, Bill had a series of questions, including “whether I’d seen a headstone for Lodowick where the rest of the family was buried in Castalia. (I hadn’t and I had looked reasonably well.) He asked me if I’d ever seen Lodowick’s name written in cursive to the degree that it looked like it began with an “S” (thanks to research help from Civil War buff, Billy Molina, I knew that it had), and whether I’d seen his name spelled as Ludwig (I had).”

Through a series of conversations, Lodowick’s burial information was cleared up and he was finally entered into the Sons of Union Veterans of the Civil War Graves Registration Database. When this happened, the last of the 72nd OVI soldiers buried at Shiloh was now officially listed there. How ironic that Lodowick died of a disease that was epidemic during the Civil War—and it was at the inception of the pandemic in the United States that he was finally, truly identified.

Lodowick G. Miller, 158 years after his death, can finally receive the honor he deserves. RIP. 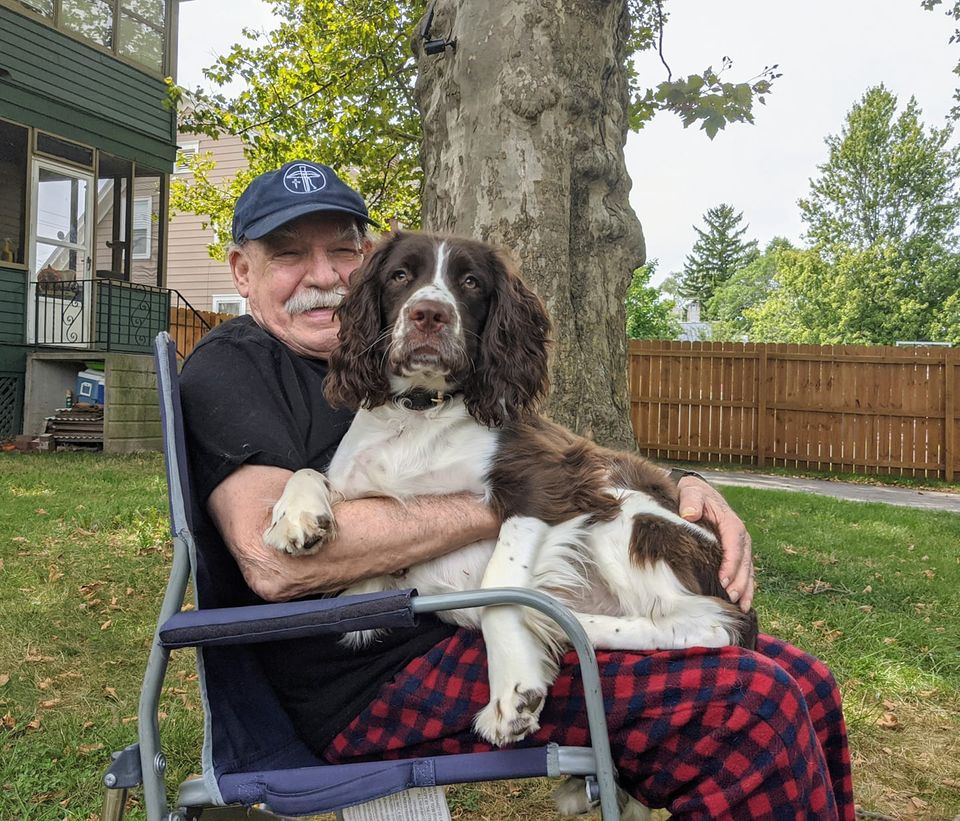