I recently began to share my research into the life of a Union Civil War soldier, Wells Waite Miller, a man who nearly died at Gettysburg. This post picks up that story and shares his journey towards the small farming town of Gettysburg, Pennsylvania using Lt. Colonel Franklin Sawyer’s book on the subject, The Eighth Ohio at Gettysburg, as a source for quotes and memories.

In response to Confederate General Robert E. Lee’s invasion of Union soil, the Army of the Potomac was directed to head to Pennsylvania. This, of course, included Wells Waite Miller and the other men of the 8th Ohio Volunteer Infantry (OVI). This battle-hardened unit was among those that had already fought to successfully secure the Sunken Road in fierce fighting at Antietam in September 1862 and battled in open fields below Marye’s Heights in Fredericksburg—and now the Army was leaving Virginia to pursue Lee and his Army of Northern Virginia.

June 26th saw the men of the 8th OVI crossing the Potomac River at Edwards Ferry in Maryland, feeling a sense of urgency. When told that the Union army was now in “hot pursuit” of Lee, the 8th OVI received orders to move at double quick speed. They reached Monocacy Junction in Maryland on June 30th with Lt. Colonel Franklin Sawyer calling this the “most fatiguing march ever made by the regiment.” And yet, they were still far from their desired location.

This exhausting troop movement was therefore followed up with another 24 hours of marching with barely a moment to rest as the men covered another 35 to 40 miles of ground. “The day was intensely hot,” Sawyer later recalled, “and numerous little creeks and streams, swollen by recent rains, had to be forded, sometimes deep.”

This fierce marching had exhausted the men so much that, if they rested their muskets for a moment, they would fall asleep. Dressed in wool in the summer heat, they lugged weapons and about 30 to 40 pounds of gear apiece. They did, however, achieve their goal, catching up with the main portion of the Union Army, which was now positioned close to Lee’s forces. The animated map below from the American Battlefield Trust shows troop movements over the three-day battle.

When the morning of July 1 dawned, the men of the 8th OVI—still little rested—continued to move towards the crossroads of Gettysburg. By noon, they were close enough, according to Sawyer, to hear and see the “roar of artillery and the grim clouds of dust and smoke that gathered gloomily along the otherwise clear sky away to our front.”

Now here is how Sawyer describes the next set of events. “Our pace became quickened—and, almost insensibly, the march more hurried—brief announcements of a fierce battle beyond Gettysburg was passed down the line from couriers hastening to the headquarters of the General in Chief. Excitement began to spread and every one because anxious to hasten forward to the fray.”

More reliable news of the battle soon came by way of aids-de-camp and orderlies. ‘It was a fierce fight—our people being driven—Gen. Reynolds killed,’ was what we heard as courier after courier passed us.”

The men were then sent to sleep on top of their weapons on high ground located about a mile behind Cemetery Ridge, a two-mile long ridge that rose above the terrain, stretching anywhere from 40 to 80 feet. This is what an aerial view looks like today through Google Earth. 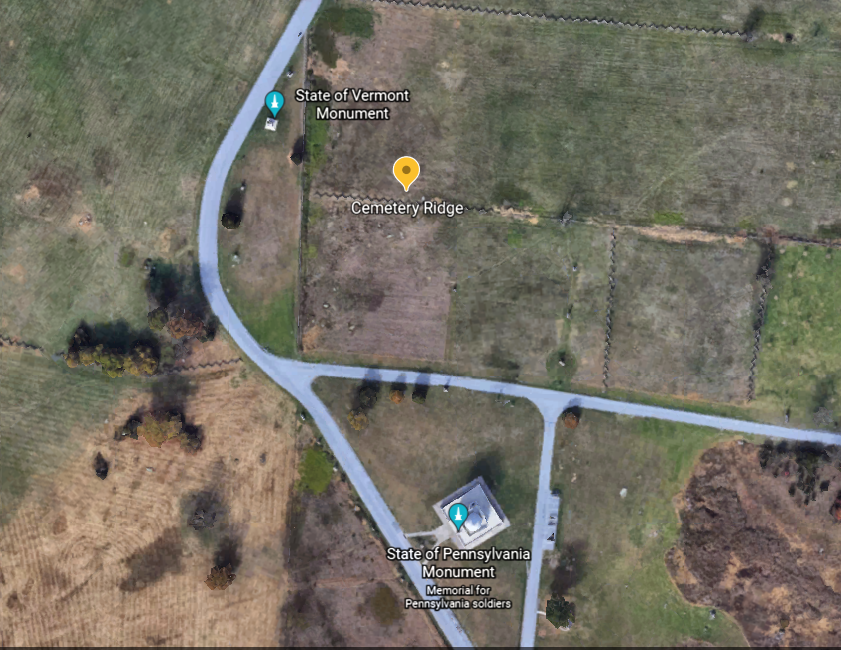 Awakened by reveille at 4 a.m. on July 2, the men hastily ate hardtack (hard biscuits) and flitch (cured meat) as they got in line, but guns were still silent. The men were positioned along the ridge and, as Sawyer shares, for “several hours everything seemed unusually quiet, for a battle-field. The men generally lay down for rest. Capt. Miller was sent across the Emmitsburg road with skirmishers, and at once advanced to his position. Notwithstanding the seeming quiet, there was much activity on the portions of the field.”

“Capt. Miller” refers to Wells Waite Miller, a young man who was only 19 years old when he enlisted in the Union Army, later said to be the first man in his rural township of Castalia, Ohio to enlist. When he led the skirmishers to their advanced position at Gettysburg, he was just 21 years old. Survival, of course, was far from guaranteed.

Overview of What’s to Come

In and of itself, Miller’s situation was not unlike tens of thousands of other men during this ferocious time in history, even given the incredible responsibility that Sawyer assigned him. Having said that, more modern scholarship suggests that the contributions of the 8th OVI have not been recognized as much as they should, and their position, geographically speaking, may have been even more precarious than what’s been previously believed.

That, by itself, can add interest to the lives of Miller and his fellow soldiers. Then, by taking a look back in time, it can be argued that the life of Wells Waite Miller—and those of his ancestors and descendants—can serve as a reflection of our country’s overall history. From immigration as part of the Puritan Great Migration to life in the Colonies, and from the Revolutionary War to the Civil War—and from his family’s experiences in farming, business, politics, education, religion, law and more—it can be said that the Miller family provides a glimpse into what it has meant, for many people, to be Americans.

So, in this series of blog posts, I will go back in time and then more chronologically bring you back to the pivotal moment in time: for both Wells Waite Miller, for his unit, and for the Union Army and country as a whole.